This notebook will show you how to work with the C. elegans L2-stage sci-RNA-seq data from Cao et al. (Science, 2017).
It aims to cover the following use cases:


Key advantages of sci-RNA-seq over contemporary alternatives (such as droplet-based single cell RNA-seq):


Monocle is a comprehensive package for single cell analysis developed by the Trapnell lab. Monocle version 2.3.5 is the version that was used for the paper. To install Monocle 2.3.5, open a command line and run:

Later versions of Monocle may produce different results for use case 4 (re-clustering with t-SNE) due to changes in how we preprocess the data before running t-SNE. We will update this vignette when we release the next version of Monocle, 2.6.0, to support the new version. If you wish to learn more about Monocle click the following link to go to the Monocle Website .

Now, go back to your R session and verify that Monocle 2.3.5 installed successfully (look for monocle_2.3.5 in the output of sessionInfo).


Next, we'll download an RData file that has the Cao et al. data and some utility functions to help navigate it.

Do Not Open GitHub Issues for Questions

If you need help or have any questions, submit your posts to the Google Group. If you find a problem with the code in the vignettes or with the data quality, open a GitHub issue.


Use Case 1: Accessing the Raw Data

To this end, we have created a website to facilitate the further annotation of these data by the community (http://atlas.gs.washington.edu). Gene-by-cell matrices and vignettes for how to work with the data are also hosted at this site.

If you aren't familiar with working with single cell RNA-seq data, we highly recommend that you take a look at the examples and utility functions presented in the other sections of this document instead of trying to dive in to the raw data directly.

The pData function is used to access cell annotations.


neuron.type in pData(cds.neurons) is the annotation used in Figure 4 of Cao et al.

Use Case 2: Expression Pattern of a Gene of Interest

The show.expr.info function returns statistics related to the expression of a given gene in tabular form. The first argument is the gene name. The second argument specifies whether to show statistics at the level of tissues, cell types, or neuron (sub)-types. See the examples below.

the function returns a data frame with five columns:

Note that you can see the source code for any of the utility functions used in this vignette. Just run the function name with no parentheses.

The plot.expr function can be used to highlight cells that express a given gene on the t-SNE map. 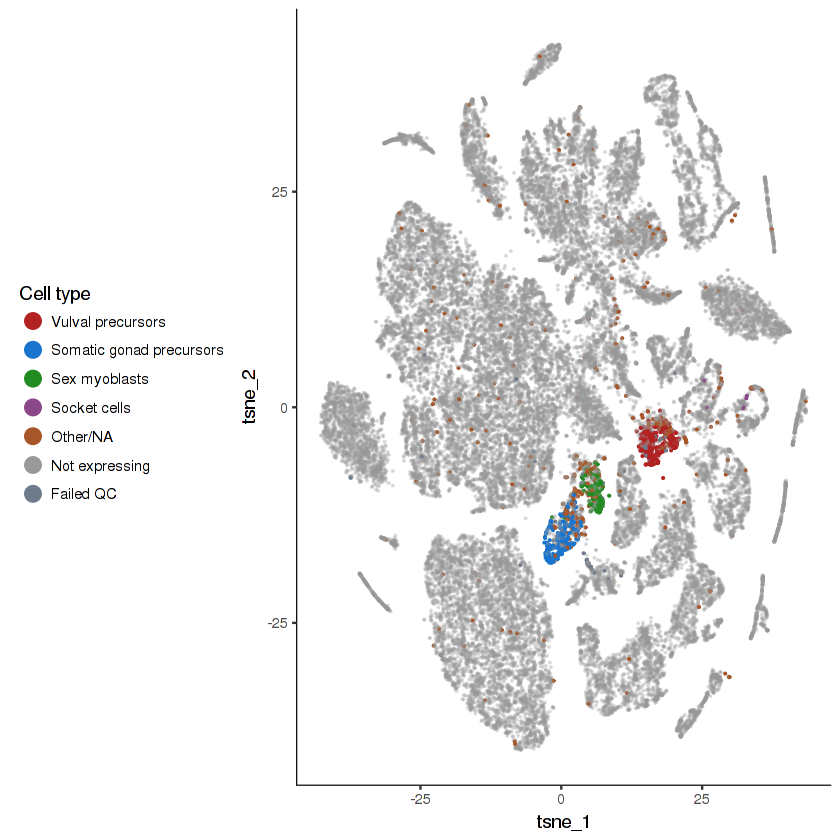 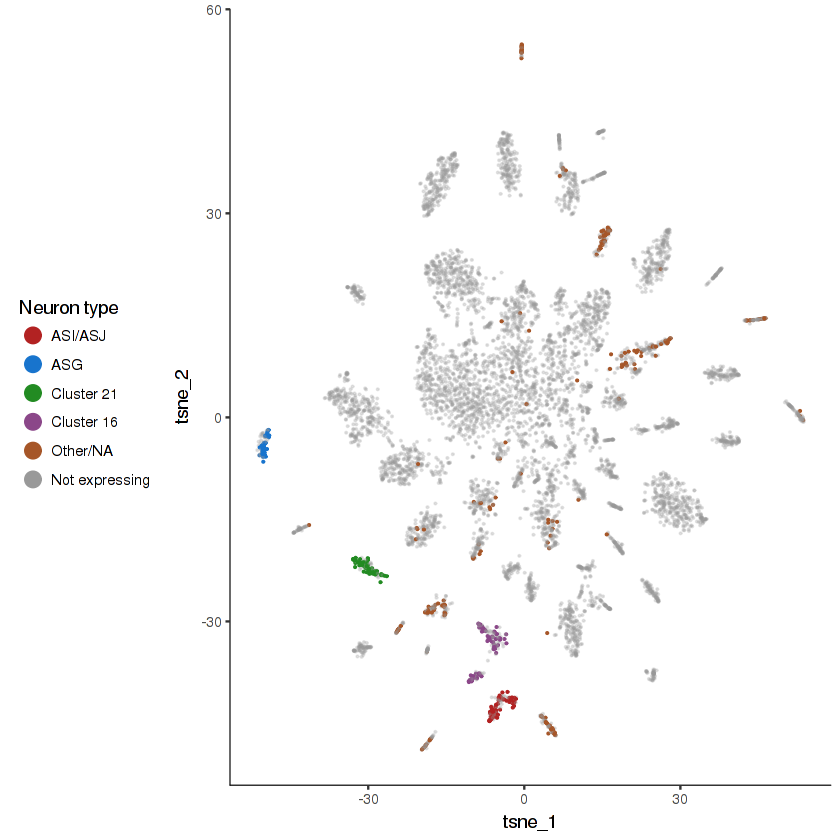 We've defined a function two.set.differential.gene.test that finds and reports statistics on differentially expressed genes (DEG) that distinguish between two defined sets of cells. This is a wrapper that just adds a bit of functionality around Monocle's differentialGeneTest function.

If you run two.set.differential.gene.test on large sets of cells (> 1000-ish), it may take a bunch of memory. The utility functions is.tissue, is.cell.type, and is.neuron.type may be used to create the boolean vectors required for the set.1.filter and set.2.filter parameters. Each function takes a CellDataSet and a string and tests for each cell whether its tissue / cell type / neuron type is defined (not NA) and equal to the given value.

Running two.set.differential.gene.test with formal = T will compute q-value (the false detection rate at which a gene can be considered to be differentially expressed between the two sets). This is very slow however, so we recommend not using it for exploratory analysis and only using it after you've found something interesting and want to verify that the finding is statistically robust. Using these genes as markers, let's look for differentially expressed genes between anterior and posterior BWM.

R102.2 is expressed in nine specific pairs of ciliated sensory neurons . We have identified some of these in this dataset, but others remain ambiguous. 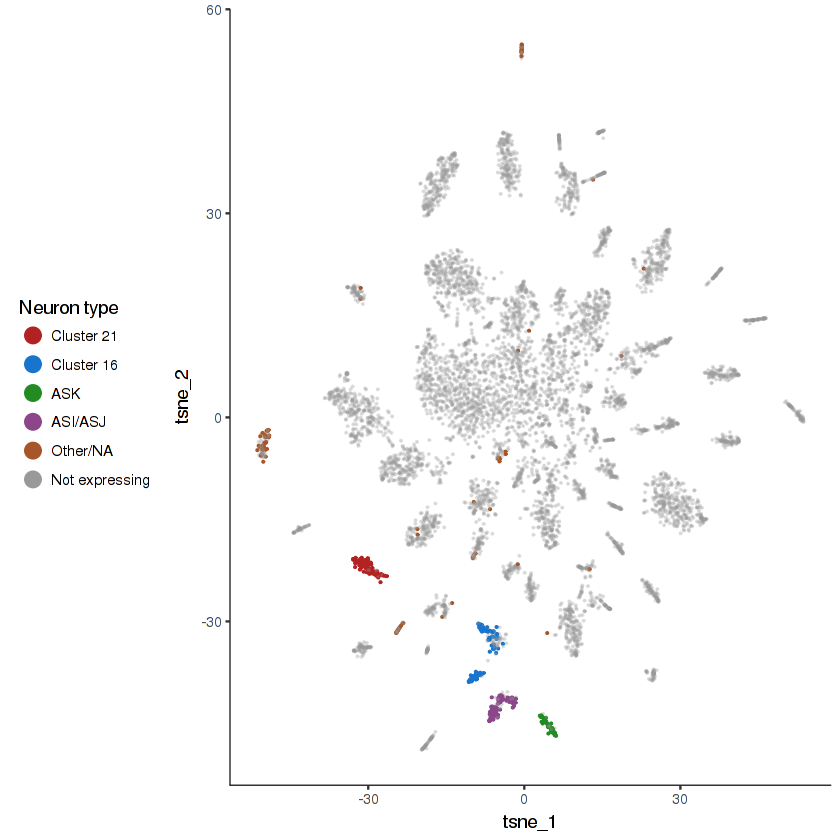 two.set.differential.gene.test can be used to find DEG between the mystery R102.2(+) clusters and other ciliated sensory neurons. If you can figure out what these clusters correspond to, let us know!


In the Cao et al. paper, we found that several of the neuron t-SNE clusters expressed markers of cholinergic neurons such as unc-17, cho-1, and cha-1. Let's perform a sub-clustering of these cholinergic neurons to see if we can get better separation. First, we'll identify which clusters are enriched for cells that express cholinergic markers. 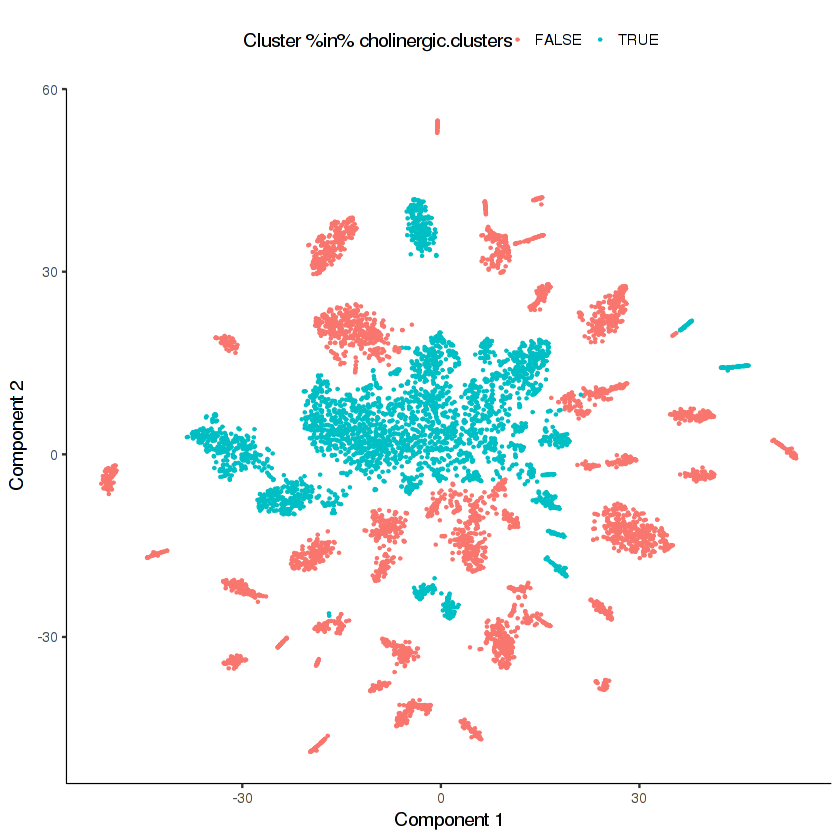 The next step is to run a new t-SNE dimensionality reduction on this subset of cells. 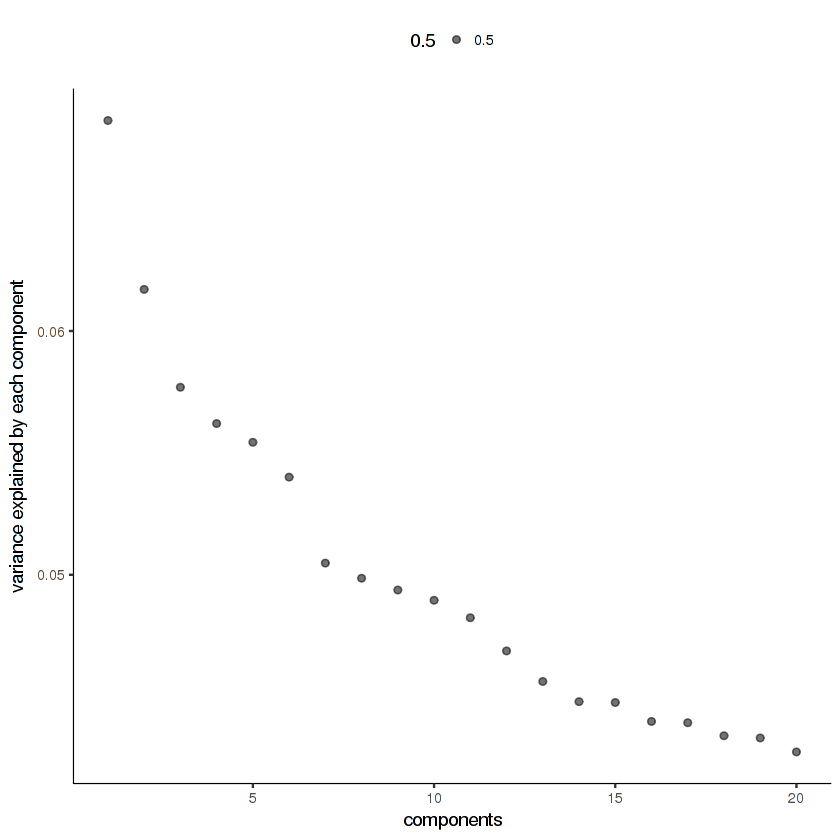 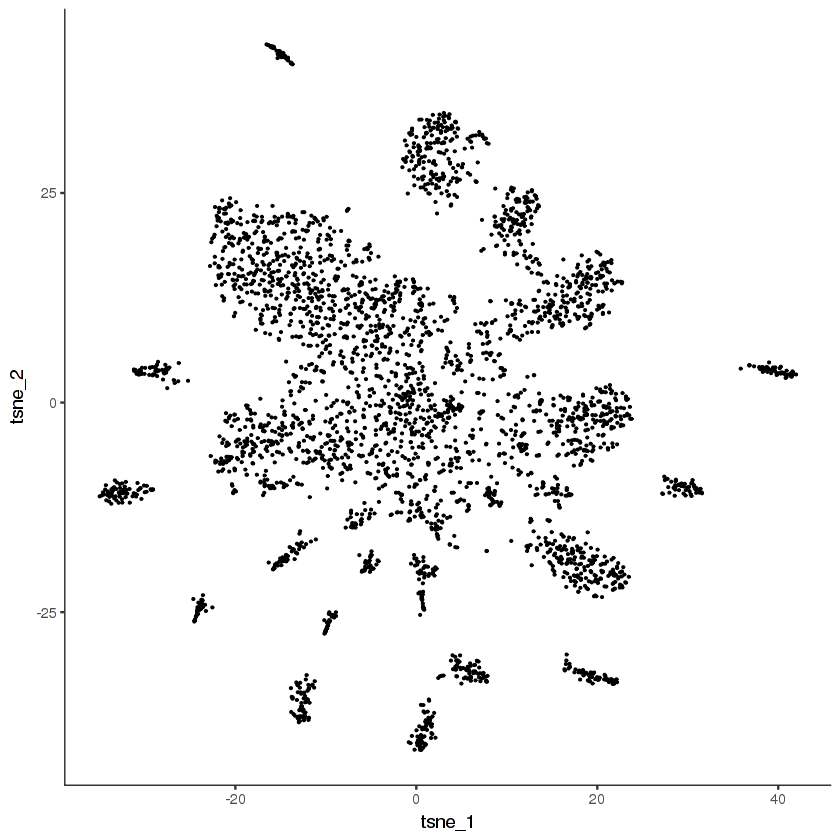 Now we'll cluster the cells in the t-SNE space using density peak clustering. In density peak clustering, rho measures to the local density of cells and delta measures the minimum distance to a region of higher local density. Go to this site for more details. You want to set thresholds on rho and delta that enclose the outlier points in the scatter plot. In my experience, it's usually better to over-cluster than to under-cluster. 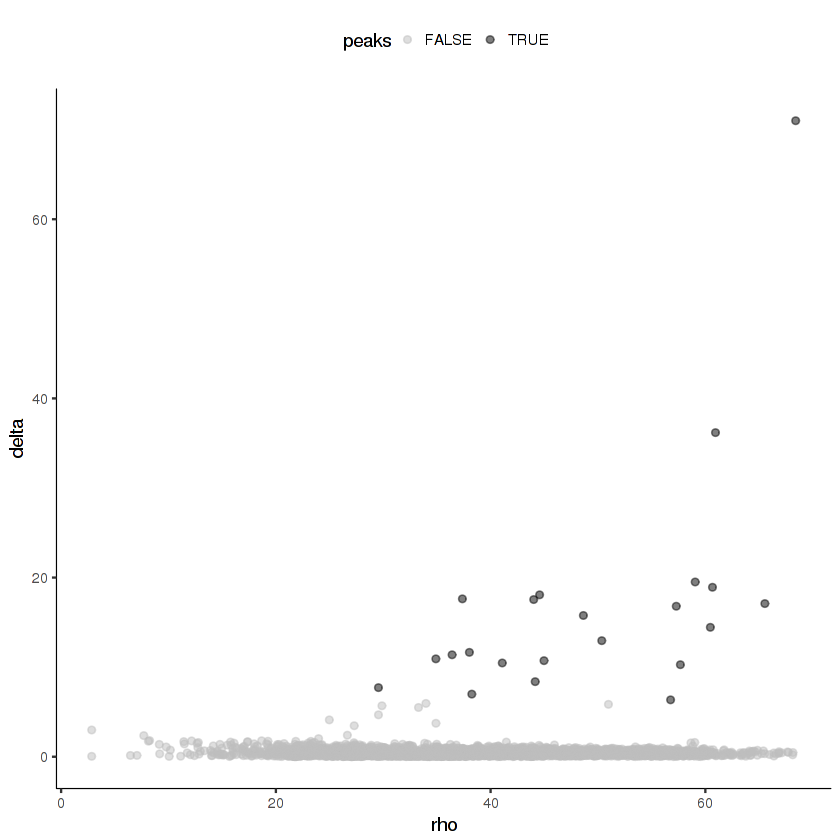 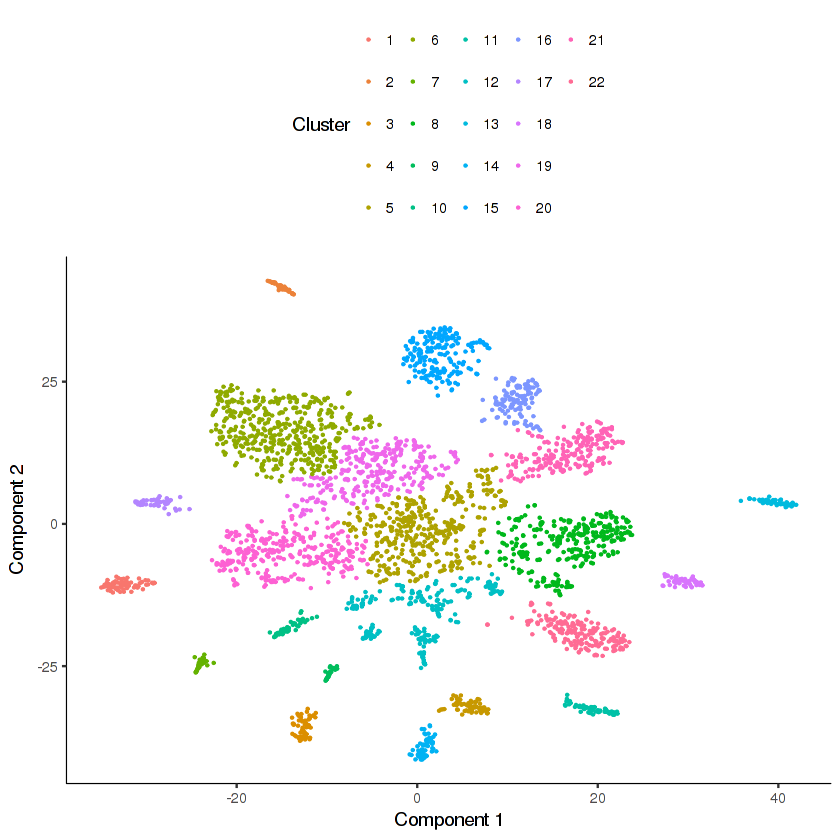 Looks like there are many distinct clusters. Recall that we input only 9 clusters from the cds.neurons t-SNE into this re-clustering. The re-clustering appears to have revealed new potential distinct cell types.

Now would be a good time to save your progress.

In the previous examples for using plot.expr, the function used pre-computed expression tables for cds and cds.neurons to show which cell types / neuron types were expressing a given gene. The following code will set up plot.expr so it can show which density peak clusters from this re-clustering analysis express a given gene. You can also use show.expr.info with your own clustering. 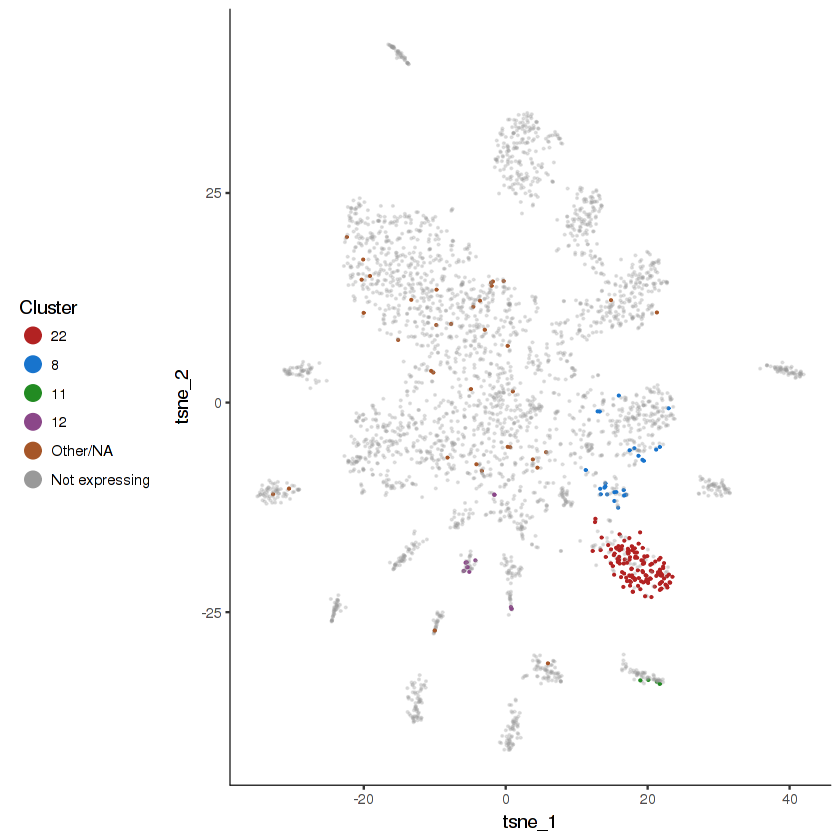 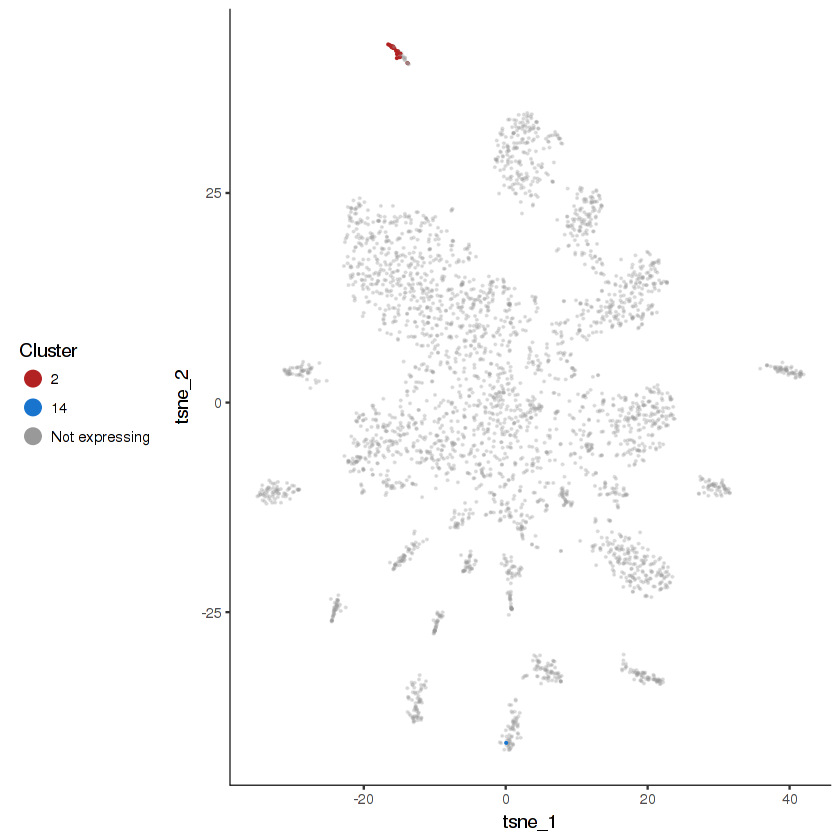 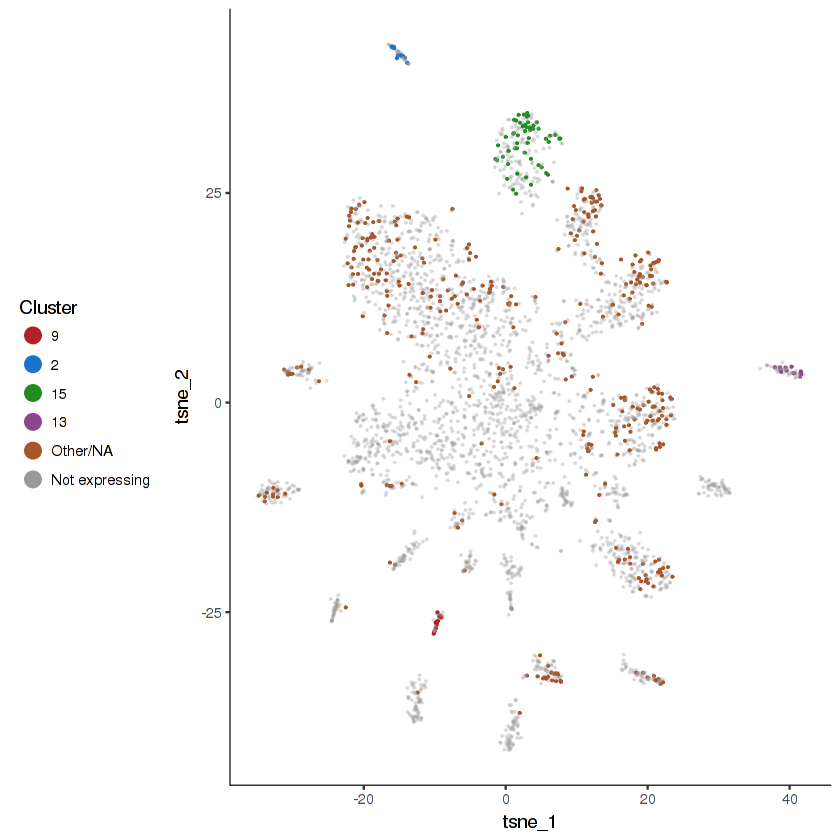